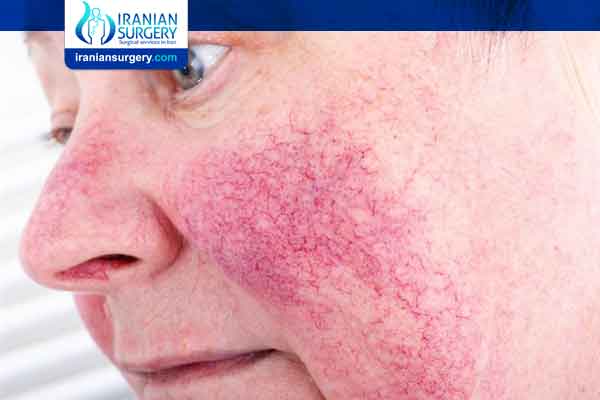 Rosacea is a long-term skin condition that typically affects the face. It results in redness, pimples, swelling, and small and superficial dilated blood vessels. Often, the nose, cheeks, forehead, and chin are most involved. A red, enlarged nose may occur in severe disease, a condition known as rhinophyma.

Read more about: What is rhinophyma?

The four types of rosacea are:

Rosacea symptoms are different between each subtype.

Doctors don't know exactly what causes rosacea. A few things that may play a role are:

Some things about you may make you more likely to get rosacea. For instance, your chances of getting the skin condition go up if you:

Rosacea is not caused by poor hygiene and it's not contagious. But there are things you can try to help with symptoms.

If you know that a trigger, for example alcohol or spicy food, makes symptoms worse, try to avoid it as much as possible.

No specific test is used to diagnosis rosacea. Instead, your doctor relies on the history of your symptoms and an examination of your skin. You may have tests to rule out other conditions, such as psoriasis, eczema or lupus. These conditions can sometimes cause signs and symptoms similar to those of rosacea.

If your symptoms involve your eyes, your doctor may refer you to an eye specialist (ophthalmologist) for evaluation.

Sometimes other oral antibiotics such as cotrimoxazole or metronidazole are prescribed for resistant cases.

Anti-inflammatory effects of antibiotics are under investigation.

Disadvantages of long-term antibiotics include development of bacterial resistance, so low doses that do not have antimicrobial effects are preferable (e.g., 40–50 mg doxycycline daily).

When antibiotics are ineffective or poorly tolerated, oral isotretinoin may be very effective. Although isotretinoin is often curative for acne, it may be needed in low dose long-term for rosacea, sometimes for years. It has important side effects and is not suitable for everyone.

Nutraceuticals targeting flushing, facial redness and inflammation may be beneficial.

Certain medications such as clonidine (an alpha2-receptor agonist) and carvedilol (a non-selective beta-blockers with some alpha-blocking activity) may reduce the vascular dilatation (widening of blood vessels) that results in flushing. They are generally well tolerated. Side effects may include low blood pressure, gastrointestinal symptoms, dry eyes, blurred vision and low heart rate.

Oral non-steroidal anti-inflammatory agents such as diclofenac may reduce the discomfort and redness of affected skin. Although these are uncommon, serious potential adverse effects to these agents include peptic ulceration, renal toxicity and hypersensitivity reactions.

Calcineurin inhibitors such as tacrolimus ointment and pimecrolimus cream are reported to help some patients with rosacea.

Read more about: How to avoid loose skin after bariatric surgery?

Persistent telangiectasia can be successfully improved with vascular laser or intense pulsed light treatment. Where these are unavailable, cautery, diathermy (electrosurgery) or sclerotherapy (strong saline injections) may be helpful. Papulopustular rosacea may also improve with laser treatment or radiofrequency.

Rhinophyma can be treated successfully by a dermatologic or plastic surgeon by reshaping the nose surgically or with carbon dioxide laser.

Read more about: dermatitis after rhinoplasty