Photorefractive keratectomy (PRK) and laser-assisted sub-epithelial keratectomy (or laser epithelial keratomileusis) (LASEK) are laser eye surgeryprocedures intended to correct a person’s vision, reducing dependency on glasses or contact lenses. LASEK and PRK permanently change the shape of the anterior central cornea using an excimer laser to ablate (remove by vaporization) a small amount of tissue from the corneal stroma at the front of the eye, just under the corneal epithelium. The outer layer of the cornea is removed prior to the ablation.

The outer layer of the cornea, or epithelium, is a soft, rapidly regrowing layer in contact with the tear film that can completely replace itself from limbal stem cells within a few days with no loss of clarity. The deeper layers of the cornea, as opposed to the outer epithelium, are laid down early in life and have very limited regenerative capacity. The deeper layers, if reshaped by a laser or cut by a microtome, will remain that way permanently with only limited healing or remodelling.

With PRK, the corneal epithelium is removed and discarded, allowing the cells to regenerate after the surgery. The procedure is distinct from LASIK (laser-assisted in-situ keratomileusis), a form of laser eye surgery where a permanent flap is created in the deeper layers of the cornea. 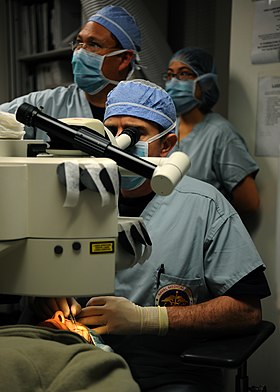 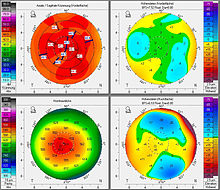 Preliminary investigation of the corneal topography. The test maps a patient’s cornea for raised areas and surface inconsistencies.

LASEK has advantages over LASIK in that it avoids added complications associated with the flap created during surgery. The procedure may also reduce the chances of dry eye symptoms after surgery. Due to the LASEK procedure not requiring a surgical flap, athletes or individuals concerned with trauma introduced by the flap may see benefits to LASEK. Patients that wear contact lenses will typically need to stop wearing these for a specified time before the procedure.

LASEK disadvantages include a longer recovery time for vision in contrast to LASIK. Post-surgery patients are required to wear a “bandage” contact lens over the eye, which is not required for LASIK post-surgery. Another disadvantage is that patient may be required to apply steroid eye drops for a few weeks longer than that of a LASIK procedure. Vision after the LASEK procedure has a longer recovery than LASIK which may be between five days and two weeks for blurred vision to properly clear.

When LASEK is compared to LASIK, LASIK can have better outcomes with corneal haze while LASEK has a lower rate of flap complications than LASIK.

There are a number of basic criteria which a person should satisfy:

There are also some pre-existing conditions that may complicate or preclude the treatment.

Some complications that can be temporary or permanent include:

As with other forms of refractive surgery, keratoconjunctivitis sicca, colloquially referred to as ‘dry eye,’ is the most common complication of PRK, and can be permanent. In more advanced cases, recurrent erosions occur during sleeping from adherence of the corneal epithelium to the upper eyelid with rapid eye movement. Adjuvant polyunsaturated fatty acids (PUFAs) with high Omega-3 content before and after surgery improves sicca, possibly due to their anti-inflammatory effects. Foods containing PUFAs include flax and fish oil. Brush PRK to denude the epithelium, instead of alcohol based techniques, also result in quantitatively lower ocular dryness after surgery. The amount of corneal hazing after surgery is also decreased with brush technique. The platelet activating factor LAU-0901 has shown effect in mitigating dry eye in mouse models. Rabbit models have also shown improvement with topical nerve growth factor (NGF) in combination with docosahexaenoic acid (DHA). Mitomycin C worsens post-surgical dry eye.

PRK may be performed on one eye at a time to assess the results of the procedure and ensure adequate vision during the healing process. Activities requiring good binocular vision may have to be suspended between surgeries and during the sometimes extended healing periods.

PRK can be associated with glare, halos, and starburst aberrations, which can occur with postoperative corneal haze during the healing process. Night halos are seen more often in revisions with small ablation zone size. With more recent developments in laser technology, this is less common after 6 months though symptoms can persist beyond a year in some cases. A dilute concentration of the chemotherapeutic agent, Mitomycin-C, can be applied briefly at the completion of surgery to reduce risk of hazing, although with increased risk of sicca.

Predictability of the resulting refractive correction after healing is not totally exact, particularly for those with more severe myopia. This can lead to under/overcorrection of the refractive error. In the case of the overcorrection, premature presbyopia is a possibility. Experienced surgeons employ a custom-profile algorithm to further enhance predictability in their results.

In 1 to 3% of cases, loss of best corrected visual acuity (BCVA) can result, due to decentered ablative zones or other surgical complications. PRK results in improved BCVA about twice as often as it causes loss. Decentration is becoming less and less of a problem with more modern lasers using sophisticated eye centering and tracking methods.

A systematic review that compared PRK and LASIK concluded that LASIK has shorter recovery time and less pain. The two techniques after a period of one year have similar results.

A 2016 systematic review found that it was unclear whether there were any differences in efficacy, accuracy, and adverse effects when comparing PRK and LASEK procedures among people with low to moderate myopia. The review stated that no trials have been conducted comparing the two procedures on people with high myopia.

Uses Amoils Brush and gas cooling to reduce the pain

Uses mitomycin in an attempt to reduce post-operative haze but is of dubious effectiveness. Possible long-term side effects are unknown.

The U.S. Federal Aviation Administration will consider applicants with PRK once they are fully healed and stabilized, provided there are no complications and all other visual standards are met. Pilots should be aware, however, that potential employers, such as commercial airlines and private companies, may have policies that consider refractive surgery a disqualifying condition. Also, civilians who wish to fly military aircraft should know that there are restrictions on those who have had corrective surgery. The Army now permits flight applicants who have undergone PRK or LASIK. Uncomplicated, successful corneal refractive surgery does not require a waiver and is noted as information only.

The Navy and Marines will routinely grant a waiver for pilots or student naval aviators, as well as naval flight officers, UAS operators and aircrew, to fly after PRK and LASIK, assuming preoperative refractive standards are met, no complications in the healing process were encountered, asymptomatic with regard to significant haloes, glare or dry eye, off all medications, and passing their standard vision tests. In one study, 967 of 968 naval aviators having PRK returned to duty involving flying after the procedure. In fact, the U.S. Navy now offers free PRK and LASIK surgery at the National Naval Medical Center to Naval Academy Midshipmen who intend to pursue career paths requiring good uncorrected vision, including flight school and special operations training.

The U.S. Air Force approves the use of PRK and LASIK. Since 2000 the USAF has conducted PRK for aviators at the Wilford Hall Medical Center. More airmen were allowed over the years and in 2004 the USAF approved Lasik for aviators, with limits on the type of aircraft they could fly. Then in 2007 those limits were lifted. Most recently in 2011 the USAF expanded the program, making it easier for more airmen to qualify for the surgery. Current airmen (Active Duty and Air Reserve Components who are eligible) are authorized surgery at any DOD Refractive Surgery Center. Those airmen not eligible, are still able to get the surgery done at their own expense by a civilian surgeon, but must first be approved (Approval is based on the same USAF-RS program). Others that do not fall into those categories (i.e. applicants who are seeking a pilot slot) can still elect to have the surgery done, but must follow the criteria in accordance with the USAF Waiver Guide. Those applicants will be evaluated at the ACS during their Medical Flight Screening appointment to determine if they meet waiver criteria.

In the majority of patients, PRK has proven to be a safe and effective procedure for the correction of myopia. PRK is still evolving with other countries currently using refined techniques and alternative procedures. Many of these procedures are under investigation in the U.S. Given that PRK is not reversible, a patient considering PRK is recommended to contact an eye-care practitioner for assistance in making an informed decision concerning the potential benefits and liabilities that may be specific to him or her.

In the U.S.A. candidates who have had PRK can get a blanket waiver for the Special Forces Qualification, Combat Diving Qualification and Military Free Fall courses. PRK and LASIK are both waived for Airborne, Air Assault and Ranger schools. However, those who have had LASIK must enroll in an observational study, if a slot is available, to undergo training in Special Forces qualification. LASIK is disqualifying/non-waiverable for several United States Army Special Operations Command (USASOC) schools (HALO, SCUBA, SERE) per Army Regulation 40-501.