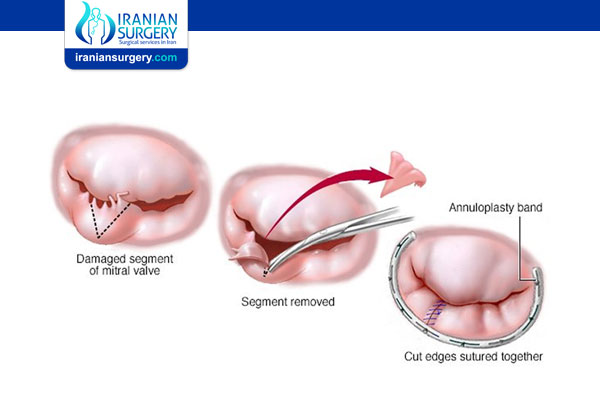 The decision about whether to repair or replace a valve is based on many things, including your general health, the condition of the damaged valve, the presence of other health conditions, and the expected benefits of surgery. In some cases, the decision clearly may be in favor of repair or in favor of replacement.

When Is Valve Repair Recommended?

Repair for mitral valve regurgitation may be recommended based on a few things. These include whether the valve can be repaired successfully.

Repair is more successful if there is not a lot of damage to certain areas of the mitral valve flaps (leaflets) or to the tough fibers that control movement of the mitral valve leaflets (chordae tendineae). Mitral valve repair is usually preferred if your valve is suitable for reconstruction and the surgeon has the appropriate level of experience and surgical skill.

The advantages of mitral valve repair include the following:

. It preserves your natural valve and its support (chordae tendineae). In general, the more of the natural valve that can be preserved during surgery, the better the results of the procedure.

. It prevents the need for lifelong anticoagulant medicine after valve replacement with a mechanical heart valve.

. It reduces the need for repeat valve surgery later in life.

When Is Valve Replacement Recommended?

Examples of serious damage or complicated conditions that might lead to mitral valve replacement include:

. Extensive ballooning of the mitral valve (rather than a single flap that puffs up).

. Severe hardening (calcification) of the valve.

. Prolapse (bulging) of the valve at an unusual location.

. Damage to the valve from infection (endocarditis).

Replacement surgery is usually preferred if you have a hard, calcified mitral valve ring (annulus) or widespread damage to the valve and surrounding tissue.

The disadvantages of mitral valve replacement include the following:

. A tissue valve may need to be replaced after a certain number of years.

. If you have a mechanical valve, you will take anticoagulant medicine for the rest of your life to prevent blood clots.

If you choose mitral valve replacement, your surgeon will preserve as much of the valve as possible. Doing so provides a greater chance of success after surgery. Keeping the valve's base intact reduces the amount of foreign structures to which the heart must grow accustomed after replacement surgery.

Numerous studies that have compared long term-survival of patients undergoing mitral valve repair or replacement have consistently shown a survival benefit with mitral valve repair. The ‘repair rate’ is thus an important variable. The ideal repair technique should be applicable to over 90% of cases. Repair rate statistics are not integral to the technique and vary from surgeon to surgeon. Unfortunately, most series do not include repair rates and prospective databases generally do not differentiate etiologies of mitral disease, such that it is not possible to accurately define repair rates for degenerative disease. We believe that the overall replacement rate in degenerative disease may be as high as 50%.

In a review of United States practice in 1999 and 2000, 42.4% of patients having isolated mitral valve surgery for valve regurgitation had a valve repair (all etiologies of mitral disease). Similarly, in the United Kingdom, 35% of mitral procedures were repairs in 2000-2001. In the United Kingdom, more mechanical mitral valve replacements were performed than mitral repairs (ratio 6:5). We believe that as degenerative disease often occurs in young patients (who are the usual candidates for mechanical valves), and as the incidence of rheumatic disease has declined substantially in western countries, a considerable number of these mechanical mitral valve replacements are likely performed for degenerative disease.

Iranian surgery is an online medical tourism platform where you can find the best heart surgeons in Iran. The price of Mitral Valve Replacement in Iran can vary according to each individual’s case and will be determined by an in-person assessment with the doctor.

For more information about the cost of Mitral Valve Replacement in Iran and to schedule an appointment in advance, you can contact Iranian Surgery consultants via WhatsApp number 0098 901 929 0946. This service is completely free.