Intraocular lens (IOL) is a lens implanted in the eye as part of a treatment for cataracts or myopia. The most common type of IOL is the pseudophakic IOL. These are implanted during cataract surgery, after the cloudy eye's natural lens (colloquially called a cataract) has been removed. The pseudophakic IOL provides the same light focusing function as the natural crystalline lens. The second type of IOL, more commonly known as a phakic intraocular lens (PIOL), is a lens which is placed over the existing natural lens and is used in refractive surgery to change the eye's optical power as a treatment for myopia (nearsightedness).

IOLs usually consist of a small plastic lens with plastic side struts, called haptics, to hold the lens in place in the capsular bag inside the eye. IOLs were conventionally made of an inflexible material (PMMA), although this has largely been superseded by the use of flexible materials. Most IOLs fitted today are fixed monofocal lenses matched to distance vision. However, other types are available, such as multifocal IOLs that provide the patient with multiple-focused vision at far and reading distance, and adaptive IOLs that provide the patient with limited visual accommodation.

Surgeons annually implant more than 6 million lenses. The procedure can be done under local anesthesia with the patient awake throughout the operation. The use of a flexible IOL enables the lens to be rolled for insertion into the capsule through a very small incision, thus avoiding the need for stitches. This procedure usually takes less than 30 minutes in the hands of an experienced ophthalmologist. The recovery period is about 2–3 weeks. After surgery, patients should avoid strenuous exercise or anything else that significantly increases blood pressure. They should visit their ophthalmologists regularly for several months to monitor the implants.

IOL implantation carries several risks associated with eye surgeries, such as infection, loosening of the lens, lens rotation, inflammation and nighttime halos, but a systematic review of studies has determined that the procedure is safer than conventional laser eye treatment. Though IOLs enable many patients to have reduced dependence on glasses, most patients still rely on glasses for certain activities, such as reading

Phakic IOL appear to be less dangerous than excimer laser surgery in those with significant nearsightedness.Intraocular lenses have been used since 1999 for correcting larger errors in near-sighted, far-sighted, and astigmatic eyes. This type of IOL is also called phakic intraocular lens (PIOL), and the crystalline lens is not removed.

More commonly, aphakic IOLs (that is, not PIOLs) are implanted via clear lens extraction and replacement (CLEAR) surgery. During CLEAR, the crystalline lens is extracted and an IOL replaces it in a process that is very similar to cataract surgery: both involve lens replacement, local anesthesia, last approximately 30 minutes, and require making a small incision in the eye for lens insertion. People recover from CLEAR surgery 1–7 days after the operation. During this time, they should avoid strenuous exercise or anything else that significantly raises blood pressure. They should visit their ophthalmologists regularly for several months to monitor the IOL implants.

CLEAR has a 90% success rate (risks include wound leakage, infection, inflammation, and astigmatism). CLEAR can be performed only on patients ages 40 and older. This is to ensure that eye growth, which disrupts IOL lenses, will not occur post-surgery.

Once implanted, IOL lenses have three major benefits. First, they are an alternative to LASIK, a form of eye surgery that does not work for people with serious vision problems. Effective IOL implants also entirely eliminate the need for glasses or contact lenses post-surgery for most patients. The cataract will not return, as the lens has been removed. The disadvantage is that the eye's ability to change focus (accommodate) has generally been reduced or eliminated, depending on the kind of lens implanted.

Some of the risks that FDA have been found so far during a three-year study of the Artisan are:

One of the causes of the risks above is that the lens can rotate inside the eye if the PIOL is too short, if the eye was incorrectly measured, or because the sulcus has a slightly oval shape (the height is slightly smaller than the width). Toric IOLs must be powered and aligned inside the eye on a meridian that corrects the patient's preexisting astigmatism. Again, these lenses can rotate inside the eye postoperatively or be placed incorrectly by the operating surgeon. Either way, the patient's preexisting astigmatism may not be corrected completely or may even increase.

When IOLs are implanted in the aphakic patient—either after clear lensectomy for the correction of refractive error or after cataract extraction to restore eyesight—astigmatism in these patients is mainly attributable to the cornea. The surgeon can ascertain the astigmatic, or steepest, meridian in a number of ways, including manifest refraction or corneal topography. Manifest refraction is the familiar test where the eye doctor rotates lenses in front of the eye, asking the patient, "Which is better (or clearer), this one or this one?" Corneal topography is considered a more quantitative test, and for purposes of aligning a toric IOL, most surgeons use a measurement called simulated keratometry (SimK), which is calculated by the internal programming of the corneal topography machine, to determine the astigmatic meridian on the surface of the cornea. The astigmatic meridian can also be identified using corneal wavefront technology or paraxial curvature matching. 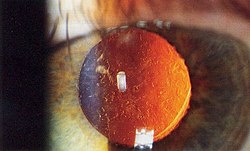 The root of these words comes from the Greek word phakos 'lens'.

Phakic IOLs are implanted without removal of the patient's original crystalline lens, and this is performed solely to correct refractive error in the presence of a clear crystalline lens.

Aphakic IOLs generally refer to lenses implanted secondarily in an eye already aphakic from previous surgery or trauma some time ago.

Pseudophakic IOLs refer to lenses implanted during cataract surgery, as a sequential step after removal of the cataractous lens of the person.

Many aphakic and pseudophakic IOLs such as anterior chamber IOLs or 3 piece posterior chamber IOLs can be used interchangeably. The exception are one piece IOLs, which must be placed within the capsular bag at the time of cataract surgery and hence cannot be used as secondary implants.

As with IOLs inserted after cataract extraction, phakic IOLs (PIOLs) can be spheric or toric. The difference is that they are placed in an eye that retains the natural human crystalline lens. As with aphakic eyes, toric PIOLs have to be aligned with the meridian of astigmatism; toric IOL misalignment or rotation can lead to residual or even greater astigmatism postoperatively.

Depending on their placement site in the eye, PIOLs can be divided into:

A toric IOL is a type of toric lens used to correct preexisting corneal astigmatism at the time of cataract surgery. This astigmatism can also be treated with limbal relaxing incisions or an excimer laserprocedure. About 40% of Americans have significant astigmatism and thus may be candidates for a toric IOL.

Cataract surgery with implantation of a toric IOL is essentially the same as cataract surgery with a conventional IOL. Like toric contact lenses, toric IOLs have different powers in different meridians of the lens, and they must be positioned on the correct meridian to reverse the preexisting astigmatism. If the toric IOL is not on the correct meridian, it may need to be repositioned in a second procedure.