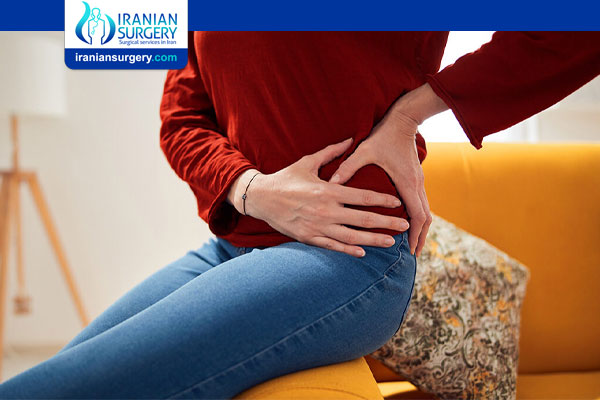 The hip joint is the largest joint of the human body. It is a ball and socket joint. The thigh bone (femur) ends with a rounded projection or ball (femoral head), which fits into the socket (acetabulum) of the pelvic girdle. Both the ball and socket are lined with cushioning tissue called cartilage.

The joint is sealed inside a tough capsule made of membrane (synovial capsule), which contains lubricating fluid that aids smooth motion of the joint. The ball is anchored firmly into the socket with tough connective tissue called ligaments. The muscles of the legs overlay these ligaments.

The hip joint is complicated so as to allow a wide range of motion while still supporting the weight of the body.

Symptoms Of Hip a Disorder

. pain in the hip

. reduced movement in the hip joint

. referred pain (may be felt in the leg)

. pain in the leg when you apply weight on that leg

People with arthritis may experience chronic pain and pain when walking. If you fall or have an accident involving your leg and you develop swelling or pain in your hip, seek medical attention immediately. These symptoms might mean you have a fracture. An untreated fracture can cause serious complications.

Causes Of a Hip Disorder

There are many conditions that may cause hip problems, such as.

There are also some hip problems predominantly seen in children, including:

. developmental dysplasia of the hip

Pain around the hip arises from structures separate from the hip joint itself, for example:

. Referred pain (for example, from the spine)

Osteoarthritis is a common form of arthritis that tends to affect people as they age. As well as the hip joints, it most often affects the hands, spine, knees and feet. It is associated with degeneration of the joint cartilage and with changes in the bones underlying the joint. The exact cause of osteoarthritis is not known, but genetics, stress on the joint and local inflammation are thought to play a role.

Osteoarthritis in the hip can lead to pain in the groin or buttock area, particularly on walking. Movement of the hip may also be restricted.

Rheumatoid arthritis is an autoimmune disease that causes inflammation in joints such as the hands, wrists, elbows, shoulders, neck, hip, knees and feet.  The exact reason some people develop rheumatoid arthritis is unknown, although genetics and environmental factors like smoking may increase risk. Inflammation in joints results in pain, prolonged stiffness (particularly first thing in the morning or after periods of rest) and swelling.

This uncommon form of inflammatory arthritis can target the spine, knees and hips. Typical symptoms include pain and stiffness first thing in the morning. The cause is unknown, but genes are thought to play a significant role.  Ankylosing spondylitis can occur by itself or in association with other disorders, including Crohn’s disease, ulcerative colitis and psoriasis. Caucasian men aged between 16 and 33 years are most susceptible.

Older people are more prone to hip fractures because bones become less dense as we age. In some cases, a person develops osteoporosis – a disease characterized by the excessive loss of bone tissue. The bones become soft and brittle, and prone to fractures and deformities. More women than men experience osteoporosis.

Dislocations of the hip occur when the head of the thigh bone is pushed forwards or backwards out of the socket. This usually occurs due to a traumatic injury such as a car accident or fall.

Developmental Dysplasia Of The Hip

Developmental dysplasia of the hip means that the hip joint of a newborn baby is dislocated or prone to dislocation. The socket is abnormally shallow, which prevents a stable fit. Slack ligaments may also allow the femoral head to slip out of joint.

Possible causes include a breech (feet first) delivery, family history and disorders such as spina bifida. Around 95% of babies born with developmental dysplasia of the hip can be successfully treated.

Perthes’ disease is a disease of the hip joint. It tends to affect children between the ages of 3 and 11 years. The ball of the femur is softened, and ultimately damaged, due to an inadequate blood supply to the bone cells. Most children with Perthes’ disease eventually recover, but it can take anywhere from 2 to 5 years for the femoral head to regenerate. The cause is unknown.

During childhood, the femoral ball is attached to the femur with a growth plate of bone. In some teenagers, the ball can slide from its proper position, causing the leg on the affected side to turn out from the body.

Possible contributing factors include the shape and location of the femoral head in relation to the femur, increased sex hormones during puberty, and weight gain. Without treatment, slipped capital femoral epiphysis will worsen and the child may experience arthritis of the hip joint in later life.

Irritable hip syndrome (sometimes called toxic synovitis) is a temporary form of arthritis, which tends to affect prepubescent children for unknown reasons. Boys with toxic synovitis outnumber girls four to one. Symptoms include hip pain (usually on one side only), inability to walk (or limping), knee pain and fever. Most cases of toxic synovitis resolve by themselves within one or two weeks.

Pain that can appear to be coming from the hip joint may, in fact, be related to soft tissue structures around the hip such as muscles, tendons and bursae, or may be referred from a back problem. A common cause of pain experienced over the outer side of the hip is trochanteric bursitis (greater trochanteric pain syndrome). This condition is due to irritation of the soft tissues surrounding the outer hip due to overuse or local muscle weakness.

If you have hip pain, your doctor will perform a physical examination and run imaging tests to try to diagnose the cause. A simple visual examination of the hip may reveal a deformity or injury. Your doctor will often manipulate your leg in different directions, looking for resistance, a popping sensation, or pain. These can indicate the source of the hip problem. However, more tests may be necessary to confirm a diagnosis.

Imaging tests allow the doctor to view the hip in detail. They’ll be able to see any fractures, deformities, or swelling using these imaging tests.

There are various treatment options for hip problems, depending on the underlying cause and severity of symptoms:

. for all forms of arthritis there are non-pharmacological treatment options – treatments that do not involve medications – such as exercise programs, education and self-management programs. Specific treatments are available for different types of arthritis. For osteoarthritis, the most common type of arthritis, simple pain-relieving medication is often effective. Joint replacement surgery (hip or knee) is sometimes considered for severe osteoarthritis

. rheumatoid arthritis and ankylosing spondylitis usually require more complex medical treatment, such as anti-inflammatory drugs and medications that target the immune system. These are usually managed by a specialist

. for babies with developmental dysplasia of the hip a special harness is worn for between six and 12 weeks to hold the joint in place while the baby’s skeleton grows and matures

. Perthes’ disease – options include bed rest, pain-relieving medication, a brace or splint (worn for between one and two years to encourage the regrowing femoral head to sit inside the socket) and surgery to treat deformities

. slipped capital femoral epiphysis – surgery can reposition the femoral head and screw it firmly into place

Iranian surgery is an online medical tourism platform where you can find the best orthopedic surgeons in Iran. The price of Hip Disorder Treatment in Iran can vary according to each individual’s case and will be determined by an in-person assessment with the doctor.

For more information about the cost of Hip Disorder Treatment in Iran and to schedule an appointment in advance, you can contact Iranian Surgery consultants via WhatsApp number 0098 901 929 0946. This service is completely free.