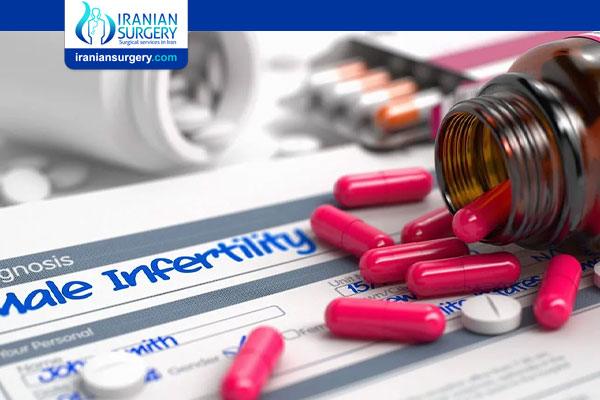 Certain drugs -- legal and illegal -- can have a negative effect on male fertility (a man’s ability to father a child). Here's a guide to the most common substances that may affect male fertility, from testosterone to antidepressants.

What effects can drugs have on male infertility?

Some drugs -- legal and illegal -- can have a negative effect on male fertility (a man’s ability to father a child). If you want to father a child, be sure to talk to your healthcare provider about any drugs you are taking and their potential side effects related to fertility. Be especially careful with non-FDA approved male fertility supplements. They may be widely advertised as fertility enhancers, but they haven’t been scientifically evaluated and may cause harm.

If you have trouble fathering a child you should undergo a complete history and physical. If you’re experiencing an unexpected side effect from a medication, you may need to try a different one.

Which drugs can affect male fertility?

This effect can be reversed for most men. However, it may take six to 12 months or more for sperm production to return to normal. In general, men trying to cause a pregnancy should not use any form of testosterone.

Unfortunately, fitness and muscle-building dietary supplements from less reputable sources may be tainted with anabolic steroids. Anabolic steroids harm male fertility the same way that testosterone does: by interfering with the hormone signals that are needed to produce sperm. Just how much damage is done depends on the drugs, dose and how long a man takes them. Most men will recover sperm production three to 12 months after they stop taking the drug.

Because of the strong negative impact of anabolic steroids on male fertility and the other health concerns related to these substances, men should not use these drugs.

Men who drink more than 10-14 alcoholic beverages per week on a regular basis should consider drinking less.

. Tobacco: Tobacco use in general, and smoking in particular, is linked to serious health conditions. Babies in households with people who smoke are much more likely to have serious respiratory illness such as severe asthma, pneumonia and repeated ear infection. Sudden infant death syndrome (SIDS) has also been linked to smokers in the household. Smoking also has a negative impact on your sperm production and the movement of sperm.

And finally, children are more likely to smoke if their parents are smokers. The entire family can benefit when a family member stops smoking. For these reasons, couples who are trying to conceive should stop smoking.

. Marijuana: THC, the active ingredient in marijuana, may decrease sperm production and weakens sexual drive by interfering with the production of testosterone. THC also may also have a direct harmful effect on the movement of sperm. Marijuana may also be laced with heavy metals (such as lead) to increase its weight or more addictive illicit drugs, such as cocaine.

Because of the negative effects of marijuana on male fertility, couples considering pregnancy should stop all marijuana use.

. Opiates (narcotics): Opiates include both prescription medications (for treating pain and addiction) and illegal street drugs. Long-term use of opiates can disrupt the signals that control testosterone production, which can cause low testosterone and decrease the quantity and quality of the sperm. The extent of the impact depends on what the opiates are, the dose and how long they’ve been used.

Men taking opiates to treat addiction should speak with their addiction counselor about the impact of their medications on fertility, as some treatments are less harmful than others.

There is no evidence that the short-term use of opiates has a negative effect on male fertility. If you’re on a short course of opiates, for instance to control pain after surgery or a broken bone, take these medications according to the instructions. If you take opiates for weeks or months, talk to your provider about how to cut back on opiate use. The recreational (illegal) use of any opiates is strongly discouraged.

. 5-alpha-reductase inhibitors (finasteride (Propecia®) and dutasteride (Avodart®): These medications are used to treat prostate enlargement and hair loss. The impact of these medications is mild and will reverse once the medication is stopped. Men who use these drugs to treat prostate enlargement will have a decrease in the volume of the semen and the total number of sperm in the semen, which may make it harder to cause a pregnancy.

. Alpha blockers (silodosin (Rapaflo®), tamsulosin (Flomax®), alfuzosin (Uroxatral®), terazosin (Hytrin®), doxazosin (Cardura®): Alpha blockers are used to treat urinary symptoms caused by an enlarged prostate. These medications affect male fertility in different ways, depending on which way each medication works. Silodosin and tamsulosin can both cause a sharp decrease in the volume of ejaculation or may inhibit ejaculation completely.

. Selective serotonin reuptake inhibitors (SSRIs): These medications are commonly prescribed in the United States for the treatment of depression and anxiety. These medications may cause sexual dysfunction, particularly prolonged time to ejaculation.

Men who take SSRIs and who are having trouble fathering a child should see a urologist for semen testing, and talk with their mental health provider about other medications.

. Ketoconazole: This medication is used to treat fungal infections. It’s commonly applied to the skin as a cream, ointment or powder. There’s no evidence to suggest that applying ketoconazole to the skin harms male fertility. When it’s taken as a pill, ketoconazole hurts testosterone production and decreases sperm production.

. Other medications: The following medications may cause male fertility problems: some antibiotics, spironolactone, cimetidine, nifedipine, sulfasalazine, and colchicine. If you are having trouble creating a pregnancy and are taking these medications, talk to your doctor and see a urologist for semen testing.