Conjoined twins are identical twins joined in uÎtero. An extremely rare phenomenon, the occurrence is estimated to range from 1 in 49,000 births to 1 in 189,000 births, with a somewhat higher incidence in Southwest Asia and Africa. Approximately half are stillborn, and an additional one-third die within 24 hours. Most live births are female, with a ratio of 3:1.

Two contradicting theories exist to explain the origins of conjoined twins. The more generally accepted theory is fission, in which the fertilized egg splits partially. The other theory, no longer believed to be the basis of conjoined twinning, is fusion, in which a fertilized egg completely separates, but stem cells (which search for similar cells) find similar stem cells on the other twin and fuse the twins together. Conjoined twins share a single common chorion, placenta, and amniotic sac, although these characteristics are not exclusive to conjoined twins, as there are some monozygotic but non-conjoined twins who also share these structures in utero.

The most famous pair of conjoined twins was Chang and Eng Bunker (1811–1874), Thai brothers born in Siam, now Thailand. They traveled widely for many years and were labeled as the Siamese twins. Chang and Eng were joined at the torso by a band of flesh, cartilage, and their fused livers. In modern times, they could have been easily separated. Due to the brothers’ fame and the rarity of the condition, the term “Siamese twins” came to be used as a synonym for conjoined twins. 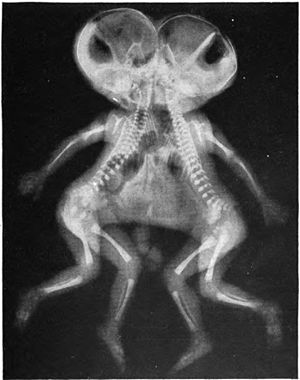 Other, less common types of conjoined twins include:

There are two theories about the development of conjoined twins. The first is that a single fertilized egg does not fully split during the process of forming identical twins. The second theory is that a fusion of two fertilized eggs occurs earlier in development. Although conjoined twinning has not been linked to any environmental or genetic cause, they occur so rarely it has not been possible to draw firm conclusions.

Surgery to separate conjoined twins may range from very easy to very difficult depending on the point of attachment and the internal parts that are shared. Most cases of separation are extremely risky and life-threatening. In many cases, the surgery results in the death of one or both of the twins, particularly if they are joined at the head or share a vital organ. This makes the ethics of surgical separation, where the twins can survive if not separated, contentious. Alice Dreger of Northwestern University found the quality of life of twins who remain conjoined to be higher than is commonly supposed. Lori and George Schappell and Abby and Brittany Hensel are notable examples.

The first record of separating conjoined twins took place in the Byzantine Empire in the 900s. One of the conjoined twins had already died, so surgeons attempted to separate the dead twin from the surviving twin. The result was partly successful as the remaining twin lived for three days after separation. The next case of separating conjoined twins was recorded in 1689 in Germany several centuries later. The first recorded successful separation of conjoined twins was performed in 1689 by Johannes Fatio. In 1955, neurosurgeon Harold Voris (1902-1980) and his team at Mercy Hospital in Chicago performed the first successful operation to separate craniopagus twins (conjoined at the head), which resulted in long-term survival for both. The larger girl was reported in 1963 as developing normally, but the smaller was permanently impaired.

In 1957, Bertram Katz and his surgical team made international medical history performing the world’s first successful separation of conjoined twins sharing a vital organ. Omphalopagus twins John Nelson and James Edward Freeman (Johnny and Jimmy) were born in Youngstown, Ohio, on April 27, 1956. The boys shared a liver but had separate hearts and were successfully separated at North Side Hospital in Youngstown, Ohio, by Bertram Katz. The operation was funded by the Ohio Crippled Children’s Service Society.

Recent successful separations of conjoined twins include that of the separation of Ganga and Jamuna Shreshta in 2001, who were born in Kathmandu, Nepal, in 2000. The 197-hour surgery on the pair of craniopagus twins was a landmark one which took place in Singapore; the team was led by neurosurgeons Chumpon Chan and Keith Goh. The surgery left Ganga with brain damage and Jamuna unable to walk. Seven years later, Ganga Shrestha died at the Model Hospital in Kathmandu in July 2009, at the age of 8, three days after being admitted for treatment of a severe chest infection.

Infants Rose and Grace (“Mary” and “Jodie”) Attard, conjoined twins from Malta, were separated in Great Britain by court order Re A over the religious objections of their parents, Michaelangelo and Rina Attard. The twins were attached at the lower abdomen and spine. The surgery took place in November, 2000, at St Mary’s Hospital in Manchester. The operation was controversial because Rose, the weaker twin, would die as a result of the procedure as her heart and lungs were dependent upon Grace’s. However, if the operation had not taken place, it was certain that both twins would die. Grace survived to enjoy a normal childhood.

In 2003, two 29-year-old women from Iran, Ladan and Laleh Bijani, who were joined at the head but had separate brains (craniopagus) were surgically separated in Singapore, despite surgeons’ warnings that the operation could be fatal to one or both. Their complex case was accepted only because technologically advanced graphical imagery and modelling would allow the medical team to plan the risky surgery. Unfortunately, an undetected major vein hidden from the scans was discovered during the operation. The separation was completed but both women died while still in surgery.