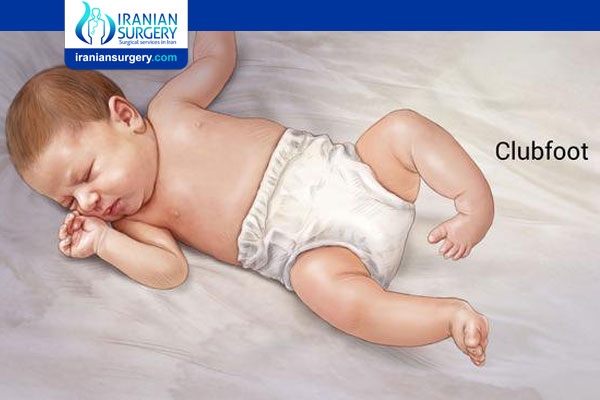 Clubfoot describes a range of foot abnormalities usually present at birth (congenital) in which your baby's foot is twisted out of shape or position. In clubfoot, the tissues connecting the muscles to the bone (tendons) are shorter than usual. Clubfoot is a fairly common birth defect and is usually an isolated problem for an otherwise healthy newborn.

Clubfoot can be mild or severe. About half of children with clubfoot have it in both feet. If your child has clubfoot, it will make it harder to walk normally, so doctors generally recommend treating it soon after birth.

Iranian surgery is an online medical tourism platform where you can find the best Surgeons in Iran. The price of Clubfoot Treatment in Iran can vary according to each individual’s case and will be determined by the type of treatment you have and an in-person assessment with the doctor.

For more information about the cost of Clubfoot Treatment in Iran and to schedule an appointment in advance, you can contact Iranian Surgery consultants via WhatsApp number 0098 901 929 0946. This service is completely free.

. The top of the foot is usually twisted downward and inward, increasing the arch and turning the heel inward.

. The foot may be turned so severely that it actually looks as if it's upside down.

. The affected leg or foot may be slightly shorter.

. The calf muscles in the affected leg are usually underdeveloped.

Despite its look, clubfoot itself doesn't cause any discomfort or pain.

More than likely your doctor will notice clubfoot soon after your child is born, based on appearance. Your doctor can advise you on the most appropriate treatment or refer you to a doctor who specializes in bone and muscle problems (pediatric orthopedist).

The cause of clubfoot is unknown (idiopathic), but it may be a combination of genetics and environment.

Boys are about twice as likely to develop clubfoot as girls.

. Family history. If either of the parents or their other children have had clubfoot, the baby is more likely to have it as well.

. Congenital conditions. In some cases, clubfoot can be associated with other abnormalities of the skeleton that are present at birth (congenital), such as spina bifida, a birth defect that occurs when the spine and spinal cord don't develop or close properly.

. Environment. Smoking during pregnancy can significantly increase the baby's risk of clubfoot.

. Not enough amniotic fluid during pregnancy. Too little of the fluid that surrounds the baby in the womb may increase the risk of clubfoot.

Clubfoot typically doesn't cause any problems until your child starts to stand and walk. If the clubfoot is treated, your child will most likely walk fairly normally. He or she may have some difficulty with:

. Movement. The affected foot may be slightly less flexible.

. Leg length. The affected leg may be slightly shorter, but generally does not cause significant problems with mobility.

. Shoe size. The affected foot may be up to 1 1/2 shoe sizes smaller than the unaffected foot.

. Calf size. The muscles of the calf on the affected side may always be smaller than those on the other side.

However, if not treated, clubfoot causes more-serious problems. These can include:

. Arthritis. Your child is likely to develop arthritis.

. Poor self-image. The unusual appearance of the foot may make your child's body image a concern during the teen years.

Because doctors don't know what causes clubfoot, you can't completely prevent it. However, if you're pregnant, you can do things to limit your baby's risk of birth defects, such as:

. Not smoking or spending time in smoky environments

. Avoiding drugs not approved by your doctor

Most commonly, a doctor recognizes clubfoot soon after birth just from looking at the shape and positioning of the newborn's foot. Occasionally, the doctor may request X-rays to fully understand how severe the clubfoot is, but usually X-rays are not necessary.

It's possible to clearly see most cases of clubfoot before birth during a routine ultrasound exam in week 20 of pregnancy. While nothing can be done before birth to solve the problem, knowing about the condition may give you time to learn more about clubfoot and get in touch with appropriate health experts, such as a pediatric orthopedic surgeon and a genetics counselor.

Because your newborn's bones, joints and tendons are very flexible, treatment for clubfoot usually begins in the first week or two after birth. The goal of treatment is to improve the way your child's foot looks and works before he or she learns to walk, in hopes of preventing long-term disabilities.

This is the most common treatment for clubfoot. Your doctor will:

. Move your baby's foot into a correct position and then place it in a cast to hold it there

. Reposition and recast your baby's foot once a week for several months

. Perform a minor surgical procedure to lengthen the Achilles tendon (percutaneous Achilles tenotomy) toward the end of this process

After the shape of your baby's foot is realigned, you'll need to maintain it with one or more of the following:

. Doing stretching exercises with your baby

. Putting your child in special shoes and braces

. Making sure your child wears the shoes and braces as long as needed — usually full time for three months, and then at night and during naps for up to three years

For this method to be successful, you'll need to apply the braces according to your doctor's directions so that the foot doesn't return to its original position. The main reason this procedure sometimes doesn't work is because the braces are not used as directed.

If your baby's clubfoot is severe or doesn't respond to nonsurgical treatments, more-invasive surgery may be needed. An orthopedic surgeon can lengthen or reposition tendons and ligaments to help ease the foot into a better position.

Even with treatment, clubfoot may not be totally correctable. But in most cases, babies who are treated early grow up to wear ordinary shoes and lead full, active lives.

Clubfoot patients remain in the hospital for up to three days after surgery. The casted leg stays elevated to reduce swelling. Your child may be asked to wiggle their toes to make sure blood flow to their foot isn’t interrupted.

Casting is an important part of the recovery process. You’ll wear a cast for as long as three months to allow the incisions, tendons, and bones to heal. The cast may need to be replaced several times, especially for infants and toddlers who grow quickly. After the cast is removed, the foot should look more like a normal foot and function better.

Physical therapy plays a crucial role in the success of clubfoot surgery. Foot exercises help restore flexibility, range of motion, and muscle tone to the leg. Many people who have clubfoot have underdeveloped calf muscles in the affected leg. Even after surgery, the muscles may remain permanently smaller than in the healthy leg.

Some people must wear a brace after clubfoot surgery. The brace helps keep the foot in a more normal position and assists with normal movement.

Children who undergo clubfoot repair surgery can lead active lives with few risks. Potential risks associated with this surgery include:

. Nerve damage in the foot

. An interrupted blood flow to the foot

. The formation of an ulcer from a cast that’s too tight

The most common complaint people have after clubfoot repair is stiffness in the foot and ankle. This can result in arthritis as people age. As children get older and grow, having the surgery again is sometimes necessary.