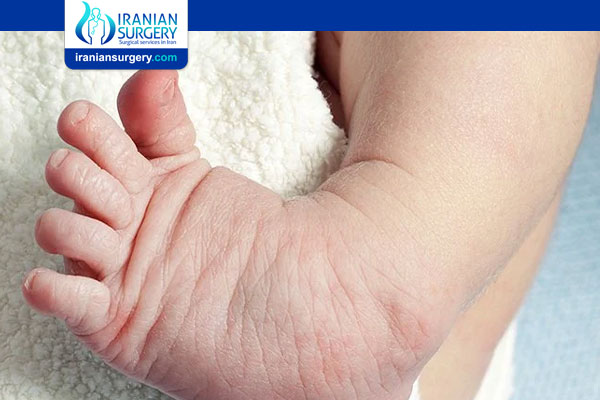 Clubfoot, also known as talipes equinovarus, is a congenital deformity of the foot that occurs in about 1 in 1,000 births in the United States. The affected foot tends to be smaller than normal, with the heel pointing downward and the forefoot turning inward. The heel cord [Achilles’ tendon] is tight, causing the heel to be drawn up toward the leg. This position is referred to as "equinus," and it is impossible to place the foot flat on the ground. Since the condition starts in the first trimester of pregnancy, the deformity is often quite rigid at birth. The three classic signs of clubfeet are:

. Fixed plantar flexion (equinus) of the ankle, characterized by the drawn-up position of the heel and inability to bring to foot to a plantigrade (flat) standing position. This is caused by a tight Achilles tendon

. Adduction (varus), or turning in of the heel or hindfoot

. Adduction (turning under) of the forefoot and midfoot giving the foot a kidney-shaped appearance

No one really knows what causes the deformity. Most commonly, it is an isolated congenital birth defect and the cause is idiopathic (unknown). Clubfoot is believed to be a "multifactorial" meaning that there are many different factors involved. The majority of clubfeet result from the abnormal development of the muscles, tendons, and bones, while the fetus is forming in the uterus during the first trimester of pregnancy (about the 8-12 week). While researchers are unable to pinpoint the exact cause, both genetic and environmental conditions play a role. Clubfoot is about twice as common in males, and occurs bilaterally (both feet) in about 50% of cases. If both parents are normal with an affected child, the risk of the next child having a clubfoot is 2-5%.

How Do I Know If My Child Has Clubfoot?

Clubfoot is easily diagnosed during the initial physical examination of the newborn. Oftentimes, the diagnosis of clubfoot can now be made prenatally during the 16-week ultrasound. If the diagnosis is made prenatally, we encourage you to schedule an appointment in the pediatric orthopedic clinic to discuss diagnosis and treatment options available. During the initial examination, your child's physician or nurse practitioner will obtain a complete prenatal, birth history, and family history. In addition, a complete physical examination will be done. Babies born with clubfoot have a slight increased risk for having developmental dysplasia of the hip (DDH). DDH is a condition of the hip joint in which the top of the thigh bone (femur) slips in and out of its socket because the socket is too shallow to keep the joint intact. Therefore, a detailed hip examination will be done to ensure that there is no instability.

If left untreated, the deformity will not go away. It will continue to get worse over time, with secondary bony changes developing over years. An uncorrected clubfoot in the older child or adult is very disabling. Because of the abnormal development of the foot, the patient will walk on the outside of his/her foot which is not designed for weight-bearing.

How Is Clubfoot Treated?

Although each child is different, treatment for clubfoot usually begins immediately after diagnosis. It is important to treat clubfoot as early as possible (shortly after birth). Specific treatment will be determined by on your child's age, overall health, and medical history. In addition, the severity of the condition, as well as the child's tolerance and parent's preference will be considered in the treatment plan. The long-term goal of all treatment is to correct the clubfoot and maintain as normal a foot as possible while facilitating normal growth and development of the child.

Ponseti's Method of Treatment: Dr. Ignacio Ponseti of the University of Iowa pioneered this method of treatment in the 1940's. Treatment will ideally start immediately after birth. The treatment involves serial manipulation and plaster casting of the clubfoot. The ligaments and tendons of the foot are gently stretched with weekly, gently manipulations. A soft fiberglass cast is then applied after each weekly session to retain the degree of correction obtained and to soften the ligaments. Thereby, the displaced bones are gradually brought into the correct alignment. Four to five long leg (from the toes to the hip) are applied with the knee at a right angle.

With Ponseti's method of treatment, a percutaneous (through the skin) heel cord lengthening (done in the operating room) is used to augment the casting in approximately 85% of patients. The tendon will be lengthened after the tenotomy, thereby reducing or eliminating the equinus of the ankle. Following the heel cord tenotomy, the foot is placed in a long leg cast for three weeks. When the long leg cast is removed after three weeks, the child will be given a special orthopedic brace known as a Denis Browne/Mitchell Brace. The bar is fit shoulder width apart and worn with reverse last shoes. The brace is worn full time (23hours/day) for the first two months after the last cast is removed. The brace is a vital aspect of the treatment, as the clubfoot has a very high incidence of recurrence when it is not worn properly.

What is the proper age to Begin the clubfoot treatment?

When a baby is born with clubfoot, a pediatric orthopedic surgeon with expertise in the manipulation and Ponseti method should start correction as soon as the diagnosis is made. Ideally, the casting should begin immediately after birth in congenital clubfoot. However, this method has been shown to be effective even when treatment is delayed for several months.

What Are Other Non-Surgical Options Used in Treating Clubfoot?

There are many different treatment options for clubfoot. Many providers prefer to use soft fiberglass casting material instead of the plaster that is used in Ponseti's method. The parent can remove the cast prior to each weekly visit in the orthopedic clinic. The manipulation and casting are continued until the deformity is either corrected or the degree of correction plateaus.

If the manipulation/serial casting treatment fails, surgery may be necessary. The surgical correction is usually not done until the child is between six and nine months of age. Surgery is performed to correct clubfoot and align the foot in a more normal position. The surgical procedure usually consists of releasing and lengthening the tight tendons/joint capsule of the foot. Many surgeons prefer to make two separate incisions, a posteromedial incision, and a small lateral incision. However, it is also possible to have one circumferential incision. The surgery usually takes 2-3 hours, and involves one or two days in the hospital. The corrections are typically held in place by inserting small pins, which are removed in the office approximately 4-6 weeks after surgery. Following surgery, the foot will need casting for another six to twelve weeks. The leg will be positioned in a bent knee long leg cast. The casting may be followed by full-time or nighttime use of brace for varying periods of time.

. Soft tissue releases that release the tight tendons/ligament around the joints and result in lengthening of the tendons. This is needed in approximately 30-50% of all treated clubfoot patients (often heel cord lengthening with tibialis tendon transfer). Tendon transfers place the tendons, or ligaments in an improved position.

. Bony procedures such as osteotomies/arthrodeses that divide bone or surgically stabilize joints to enable the bones to grow solidly together

How Long Will My Child Need to See the Orthopedic Surgeon?

Children will need regular follow-up for several years after treatment (casting or surgery) to ensure that the clubfoot does not recur. The most common time for recurrence is within one to two years following treatment. However, clubfoot can also recur several years after casting or surgery. Clubfoot recurrence can be treated with manipulation/casting or additional surgery. Therefore, we usually recommend that patients continue follow-up care until the end of growth (around 18 years of age).

Iranian surgery is an online medical tourism platform where you can find the best orthopedic surgeons in Iran. The price of Clubfoot Surgery in Iran can vary according to each individual’s case and will be determined by an in-person assessment with the doctor.

For more information about the cost of Clubfoot Surgery in Iran and to schedule an appointment in advance, you can contact Iranian Surgery consultants via WhatsApp number 0098 901 929 0946. This service is completely free.