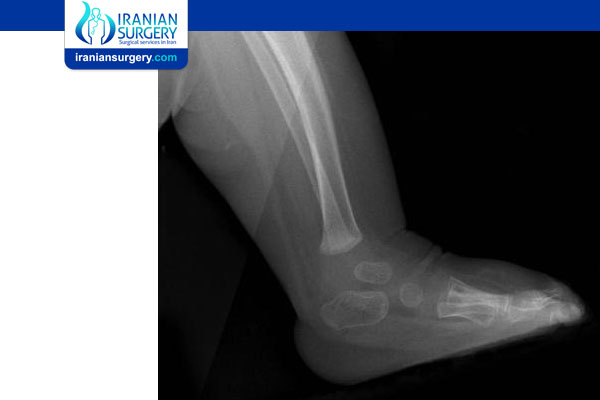 Clubfoot, or talipes equinovarus, is a congenital deformity consisting of hindfoot equinus, hindfoot varus, and forefoot varus. The deformity was described as early as the time of Hippocrates. The term talipes is derived from a contraction of the Latin words for ankle, talus, and foot, pes. The term refers to the gait of severely affected patients, who walked on their ankles. Although most clubfeet are idiopathic, it can be secondary or syndromic when its presentation is associated with another congenital disease (20% of cases). Some studies have focused on the interaction between genetics and environmental factors, showing a multifactorial etiology of the disease.

Clubfoot is one of the most common congenital limb deformities. Epidemiological studies suggest a birth prevalence in the range of 1 to 3 cases per 1000 live births, resulting in an annual estimated 7 to 43 new cases of clubfoot per million population, depending mainly on the birth rate. The higher prevalence seems to be associated with social-demographic, genetic, and environmental risk factors, which explain its prevalence among low- and middle-income countries. It affects males more than females, with a male-to-female ratio of 2:1.

Dorsoplantar views obtained in a patient with unilateral clubfoot show that the talus and calcaneus are more overlapped than in the normal condition. The talocalcaneal angle is 15° or less. Note that the line through the long axis of the talus passes lateral to the first metatarsal due to the varus position of the forefoot.

The standard radiologic method of postnatal evaluation is plain radiography. The equipment required is inexpensive and readily available. Evaluation should include the acquisition of only weight-bearing images because the stress involved is reproducible. In infants, weight bearing can be simulated with the application of dorsal flexion stress. The standard views are the dorsoplantar (DP) and lateral views. For the DP view, the beam is angled 15° toward the heel to prevent overlap of the structures of the lower leg. The lateral view should include the ankle, and not the foot, for proper depiction of the talus. Other methods of imaging are not routinely used in the evaluation of clubfoot, and experience with these is limited.

Plain radiography has the disadvantage of exposing the patient to ionizing radiation. Additionally, proper positioning can be difficult. Improper positioning can simulate deformities. Further, because clubfoot is a congenital condition, the lack of ossification in some of the involved bones is another limitation. In neonates, only the talus and calcaneus are ossified. The navicular does not ossify until the child is aged 2-3 years.

While clubfoot has been diagnosed on ultrasonography prenatally as early as 13 weeks, it is more likely to be diagnosed between the 18th and 24th weeks of pregnancy. Up to 85% of diagnoses are made on ultrasound between weeks 12 and 23 of gestation, and 70-75% of isolated cases are confirmed at delivery. Alternative imaging is not indicated prenatally. There is no consensus regarding whether to propose fetal karyotyping when isolated clubfoot is diagnosed by prenatal ultrasonography.

The accuracy of ultrasonography is dependent on many factors, such as experience of the physician, gestational age, the quality of equipment and the methodology used. A diagnosis of congenital clubfoot cannot be made in the first trimester of pregnancy because a transient clubfoot position is present during the normal development of the lower limbs. Scans performed between the 20th and 24th week of pregnancy have been found to be the most reliable to confirm or exclude a diagnosis of clubfoot. Prenatal ultrasound diagnosis of clubfoot has been reported to be more accurate in singletons than in twins. The rates of false-positive prenatal diagnosis vary widely from 0 to 40% in isolated clubfoot, with a smaller (< 10%) false-positive rate when prenatal diagnosis is made in specialized centers with a targeted anatomic ultrasound survey.

The 3 main components of the deformity are evident on radiographs and can be reproducibly quantified. With proper positioning and exposure, quantification of alignment abnormalities on plain radiographs is reliable. No confirmatory imaging is routinely used. Oblique positioning of the heel on the DP view can simulate hindfoot varus. If the lateral view is one of the foot rather than the ankle, the flat talar dome has a spurious appearance.

Normal lateral view shows the measurement of the talocalcaneal angle. The calcaneal long axis is drawn along the plantar surface. The normal range is 25-45°. Note the normal overlap of the metatarsals on the lateral view.

Lateral view of clubfoot shows the nearly parallel talus and calcaneus, with a talocalcaneal angle of less than 25°.

On the DP view, the talocalcaneal angle is less than 15°, and the 2 bones appear to overlap more than normal. Also, the longitudinal axis through the middle of the talus (midtalar line) passes lateral to the base of the first metatarsal, because the forefoot is medially deviated (see the images below).

Dorsoplantar projection of a healthy foot shows that the line through the long axis of the talus passes just medial to the base of the first metatarsal. The talocalcaneal angle measurement is shown. The normal range is 15-40°.

Dorsoplantar views obtained in a patient with unilateral clubfoot show that the talus and calcaneus are more overlapped than in the normal condition. The talocalcaneal angle is 15° or less. Note that the line through the long axis of the talus passes lateral to the first metatarsal due to the varus position of the forefoot.

Forefoot varus and supination increase the convergence of the bases of the metatarsals on the DP view, compared with the normal slight convergence (see the image below).

Dorsoplantar view of talipes equinovarus shows that the convergence of the bases of the metatarsals is abnormally increased compared with the normal convergence.

On the lateral view, instead of having the normal overlapped appearance, the metatarsals are arranged in a ladderlike configuration, with the first being most dorsal

Lateral view of shows the ladderlike configuration of the metatarsals in forefoot varus in clubfoot.

The following table contains a summary of the normal and clubfoot measurements.

In an incompletely corrected or recurrent clubfoot, characteristic abnormalities are observed. The talocalcaneal angle is normal on the DP view (see the image below), but talocalcaneal parallelism persists on the lateral view.

Image of clubfoot obtained after repair shows restoration of a normal talocalcaneal angle on the dorsoplantar view. The line along the long axis of the talus now passes medial to the first metatarsal; this finding indicates overcorrection of the forefoot varus.

Flattening of the talar dome persists on this view as well (see the image below).

Cavus of the plantar arch may be present, particularly if no plantar release was performed. Also, a periosteal reaction, sclerosis, or fracture of the lateral metatarsals may occur as a result of abnormal weight bearing on this side of the foot in cases of inadequate correction of forefoot varus (see the images below).

DP radiographs obtained in the same girl as in the previous image after surgical clubfoot repair shows persistent forefoot varus and resultant stress changes to the lateral metatarsals.

Tarraf and Carroll found that residual forefoot adduction and supination were, by far, the most common deformities that lead to repeat surgery for clubfoot. In addition to hindfoot alignment, these deformities should be actively evaluated on intraoperative radiographs.

Iranian surgery is an online medical tourism platform where you can find the best orthopedic surgeons in Iran. The price of Clubfoot Surgery in Iran can vary according to each individual’s case and will be determined by an in-person assessment with the doctor.

For more information about the cost of Clubfoot Surgery in Iran and to schedule an appointment in advance, you can contact Iranian Surgery consultants via WhatsApp number 0098 901 929 0946. This service is completely free.