Cardiothoracic surgery (also known as thoracic surgery) is the field of medicine involved in surgical treatment of organs inside the thorax (the chest)—generally treatment of conditions of the heart (heart disease) and lungs (lung disease). In most countries, cardiac surgery (involving the heart and the great vessels) and general thoracic surgery (involving the lungs, esophagus, thymus, etc.) are separate surgical specialties; the exceptions are the United States, Australia, New Zealand, and some EU countries, such as the United Kingdom and Portuga 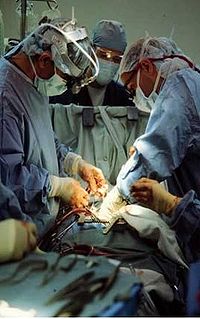 Modern surgery has developed to such an extent that the body of knowledge and technical skills required have led to surgeons specialising in particular areas, usually an anatomical area of the body or occasionally in a particular technique or type of patient.

There are ten surgical specialties and this briefing covers cardiothoracic surgery.

What do cardiothoracic surgeons do?

Cardiothoracic surgery is the specialty involved with the treatment of diseases affecting organs within the thorax (the chest), principally the heart, lungs and oesophagus. It is a relatively young specialty which has grown rapidly since the Second World War (the first successful open heart procedure using the heart-lung machine was preformed in 1953). Procedures are often lengthy and complex, requiring support from advanced forms of technology during surgery and intensive therapy for the patient after surgery.

It was the first specialty to use outcome measures to analyse and improve techniques and procedures, largely due to the fact that cardiac procedures carry a definite risk of death and outcomes can be sorted along binary lines (ie either the patient survived or they did not). The availability of these data allows us to see the great advances that have been made in terms of minimising risk to the patient, with more than 98% of patients now surviving heart bypass operations in the UK.

The Society for Cardiothoracic Surgery also provides further analysis of heart surgery outcomes, publishing the details of the types of surgery performed and mortality rates for specific procedures for all hospitals and the majority of surgeons in the UK.

Cardiothoracic surgeons work closely with cardiologists, oncologists and anaesthesiologists, and have close professional relationships with other non-medical staff such as perfusionists (who operate the heart-lung bypass machines), intensive care staff and operating department personnel.

The major subspecialities are cardiac, thoracic and congenital, each with its own characteristics. Some surgeons have a mixed practice across thoracic and adult cardiac but the majority specialise in one of these areas.

Cardiopulmonary bypass (CPB) is a technique that allows a machine to take over the function of the heart and lungs during surgery, maintaining the circulation of blood and the oxygen content of the body. Originally developed in the 1950’s, it has allowed modern surgeons to perform complex cardiac operations in a bloodless environment.

Much modern cardiothoracic surgery is performed with the help of highly advanced machines that are operated externally by a surgeon. The main advantage to these machines is that they can operate through very small incisions, and this dramatically shortens the recovery time of a patient. The most advanced machines are even able to react intelligently to changes in the patient’s body. For instance, some machines can adapt to the beating of a heart, moving their arms in synch with it, so that to the surgeon operating the machine it appears as if the heart is stationary.