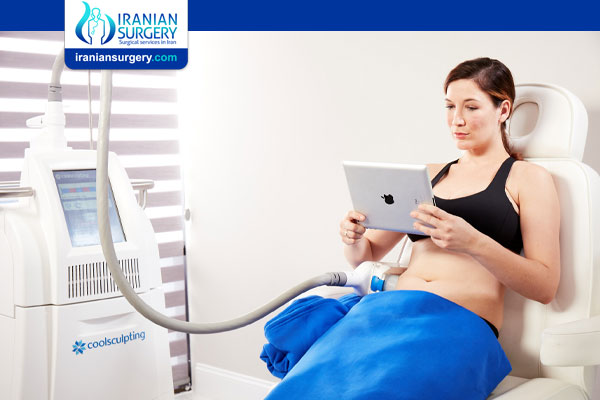 Coolsculpting is an FDA-cleared procedure that involves cryolipolysis, or “freezing” fat cells that don’t respond to traditional exercise and diet habits. It’s also sometimes used in the treatment of lipomas. Technically, the procedure is noninvasive, meaning that no surgery is involved.

This doesn’t mean that Coolsculpting is completely free of side effects. While it’s not meant to cause long-term pain and discomfort, these are some possibilities. Most discomfort is felt from the “cooling” effects of the actual procedure. As your body adjusts to the fat cell removal, discomfort can come and go. Read on to learn more about these side effects, which you can discuss with a practitioner before starting this procedure.

The pain felt from Coolsculpting is primarily experienced during the procedure itself. According to the official Coolsculpting website, the company acknowledges that it’s possible to feel pain from the numbness caused by the cooling sensations from the freezing applicator used during the procedure. You may also feel slight pinching and pulling sensations as the fat cells are frozen and pulled out. Such effects may last between 5 and 10 minutes of the 60-minute treatment time.

After the procedure, you might experience pain along with itching and swelling. The level of pain felt can also vary between treatment areas, with the abdomen being the most vulnerable.

Does Coolsculpting cause nerve damage?

Coolsculpting doesn’t cause nerve damage. However, numbness is common, according to the Center for Aesthetics. This can last for a few weeks. It can also come and go.

There have been anecdotal reports of severe pain and nerve pain for several days or weeks after the procedure. These reports were not observed in a formal clinical setting.

Common side effects after Coolsculpting include:

. fullness of the throat (if neck is being treated)

Most of these effects are felt at the site of the treatment area. According to Coolsculpting, these are temporary, and usually recede within a few weeks. Pain and discomfort after the procedure may fluctuate again three days later, where side effects may temporarily return.

Coolsculpting rarely causes serious side effects. However, these are possibilities you should discuss with your doctor ahead of time, so you can recognize the signs and respond quickly.

One possible serious but rare side effect is the formation of paradoxical adipose hyperplasia following Coolsculpting. This results in an expansion of the recently targeted fat cells. According to a study reported in JAMA Dermatology, there’s only a 0.0051 percent chance of this side effect. It also occurs months after the initial Coolsculpting treatment.

Talk to your doctor about ways you can help lower your chances of experiencing pain and other side effects during and after this procedure. They may also perform a massage to the treatment area to help increase the efficacy of the fat freezing process while limiting side effects.

Prescription pain medications aren’t typically provided for this procedure, since it’s nonsurgical. No anesthesia is used, either. However, your doctor may recommend that you take over-the-counter (OTC) pain medications if you have any pain or swelling following the procedure. You should not take any pain relievers before treatment, as this can increase side effects like bruising.

Acetaminophen (Tylenol) can help reduce pain, but you shouldn’t take more than 3,000 milligrams (mg) per day, according to Harvard Health. Too much acetaminophen can lead to liver damage, especially when taken with alcohol.

Another option is a nonsteroidal anti-inflammatory drug (NSAID), such as ibuprofen. This may be a generic product or a brand-name version such as Advil or Motrin IB. The Mayo Clinic recommends taking 400 mg every four hours, as needed. Ibuprofen has the added advantage of treating both pain and inflammation, but it may not be appropriate if you have bleeding disorders.

Always ask your doctor before taking any medications — including those sold over the counter. You can also use the following nonmedicated methods for pain relief following Coolsculpting:

The first step is to obtain a consultation with a prospective provider. To qualify for Coolsculpting, your provider will ask about your health history. It’s also recommended that you be within 30 pounds of your ideal weight, according to Coolsculpting. This will make the procedure more effective, and it may also lead to fewer side effects.

Before signing up for Coolsculpting, consider meeting with a few prospective providers. While dermatologists, dermatologic surgeons, and aestheticians can perform the procedure, not all of these types of doctors are certified in Coolsculpting. You can find providers in your area here.

Certain preparatory steps can help make the day of your treatment more comfortable. Make sure you:

. bring something to read or play with, such as your tablet

. eat a small snack to prevent nausea from treatment

According to the Center for Aesthetics, it can take two to four months before you see the full results of your Coolsculpting treatment. You shouldn’t have long-term discomfort for this entire time, but you may have side effects for a few weeks after treatment.

To make yourself more comfortable, consider the following tips for aftercare:

. Consider Spanx or other compression clothing.

. Report any severe side effects to your doctor right away.