How Much of Infertility is Genetic? 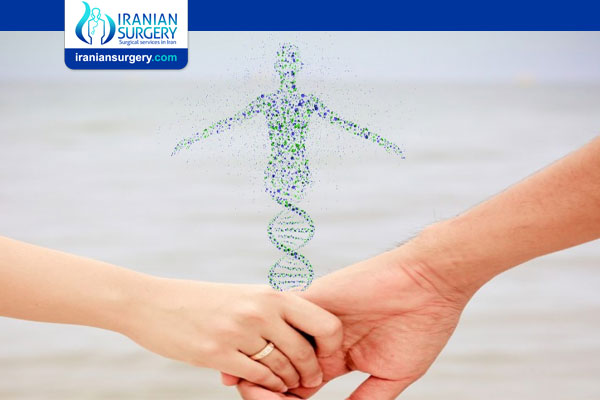 How Much of Infertility is Genetic?

You’ve probably heard the term “infertility” before. But what does that really mean? Simply put, the word “infertility” refers to the inability to get pregnant after 1 year or longer of trying or 6 months of trying if you’re over age 35.

If you’re dealing with fertility challenges, you’re not alone. Infertility is more common than you might think. The World Health Organization (WHO)Trusted Source estimates that it impacts 15% of couples of reproductive age worldwide.

From underlying health conditions to hormonal imbalances, it can seem that fertility challenges may have so many possible causes. You may be wondering whether genetics also play a role.

Keep reading for an overview of some of the genetic causes of infertility in both females and males as well as how they’re diagnosed and treated.

What genetic conditions may cause infertility in females?

Several conditions can lead to infertility in females. Let’s explore these now.

PCOS causes a hormonal imbalance that can interrupt the activity of your ovaries. When this happens, you may not ovulate each month, making it much harder to conceive.

Endometriosis is when the tissue that typically lines your uterus grows on the outside of the uterus. It often affects other parts of the female reproductive system, leading to scarring and inflammation that can lower fertility.

At the end of the day, what exactly causes both of these conditions remains unknown. However, both PCOS and endometriosis are believed to have a genetic component.

Both conditions can run in families. That means that if a close female relative — like a mother, sister, or aunt — has PCOS or endometriosis, you may be at an increased risk of developing it as well.

Certain genetic disorders can also impact female fertility. Genetic disorders happen due to changes in DNA that affect one or more genes. In some cases, these changes are passed down, or inherited, from one or both of your biological parents.

A few genetic disorders that can contribute to infertility in females include:

. Kallmann syndrome: Kallmann syndrome can be caused by changes in several different genes. It leads to the brain making low levels of tgonadotropin-releasing hormone (GnRH), which causes delayed or absent puberty.

Both Turner syndrome and the fragile X premutation can lead to primary ovarian insufficiency (POI). In POI, the ovaries stop working before you turn 40 years old. When this happens, eggs cannot develop properly and you do not ovulate anymore.

The effects of Kallmann syndrome are a little different. GnRH tells the ovaries to make estrogen and progesterone, which are vital for various aspects of female reproduction. As such, the effect of low GnRH levels is reduced fertility.

It’s also possible that genetic changes may lead to structural changes in the female reproductive system. When this happens, it can make it harder to conceive or maintain a pregnancy.

What genetic conditions may cause infertility in males?

Now that we’ve talked about the potential causes of fertility challenges in females, let’s take a look at some genetic causes in males.

Many genetic disorders can reduce male fertility. We’ll review a few notable examples of these now:

These types of deletions are another genetic cause of male infertility. The Y chromosome is typically only present in people assigned male at birth and has many of the genes for what we commonly consider male sexual characteristics. Deletion refers to an area of a gene that’s missing. Microdeletions on the Y chromosome can affect the production of sperm. For example, males with such deletions may make:

. no sperm at all

. Changes in the CFTR gene

Changes in the CFTR gene can also cause fertility challenges in males. While some changes in this gene lead to the genetic disorder cystic fibrosis, others can impact male fertility in a variety of ways, including:

. blocking the transport of sperm through the male reproductive system

. leading to improper development of the male reproductive system

In this syndrome, low production of GnRH leads to reduced production of testosterone, which is important for the development of sperm.

Genetic changes can also affect the structure of the male reproductive system. This can affect sperm production and transport.

What genetic conditions may cause fetal loss?

Genetic conditions can also lead to fetal loss. Many of these have to do with chromosomal changes in the fetus. We’ve mentioned chromosomes a few times previously in this article, but now it’s time for the low-down.

Chromosomes have all of the genes necessary for life. As such, significant changes to the chromosomes can have serious effects on a developing fetus.

A 2020 study examined 406 fetal tissue samples after miscarriages in early pregnancy. It found that 64.8% of the samples had visible chromosomal changes. Increasing age was associated with a higher risk of these changes.

One of the main causes of fetal loss, particularly in early pregnancy, is something called aneuploidy. People with aneuploidy have more or less than the typical number of chromosomes.

This type of aneuploidy happens when three copies of a chromosome are present instead of two. Fetuses with some types of trisomy cannot survive to full term.

Genetic changes can also come on a slightly smaller scale, but that doesn’t mean they’re any less serious. Types of gene changes include:

. Duplications: It’s possible that duplications or deletions of individual or small groups of genes rather than an entire chromosome can also contribute to infertility, according to 2019 research, or fetal loss as well.

. Translocations: Balanced translocations are rearrangements of parts of a chromosome such that all the genetic material is present, but just rearranged. If one or both parents has a balanced translocation, when their chromosomes mix with that of their partner, the genes may mix in such a way that it causes infertility or increases the risk of miscarriage. These atypical changes are diagnosed by a blood test that analyzes the person’s karyotype.

We mentioned earlier that it’s possible that some genetic changes may impact the structure of the female reproductive system. When the uterus is involved, it can also affect pregnancy outcomes.

One type of structural change to the uterus that can result in fetal loss is called a septate uterus. This is when a band of tissue, called a septum, runs down the center of the uterus, dividing it into two parts.

The presence of the septum means there’s a lot less space to accommodate a developing fetus. Because of this, females with a septate uterus are at an increased risk for repeated miscarriages.

How are genetic conditions that affect fertility diagnosed?

If you’re having difficulty getting pregnant, a doctor can do a variety of tests to help see what’s causing your fertility troubles. These can include:

. a thorough evaluation of your and your partner’s medical and sexual history

. a semen analysis, which checks sperm count, shape, and movement

. blood tests to check levels of different hormones or for signs of ovulation

. imaging tests to look for structural issues in the reproductive system

If your doctor suspects that a genetic factor is playing a role in your fertility challenges, they may recommend genetic testing. A blood sample can be used to do preconception carrier screening (PCS), which screens you for multiple genetic diseases that could affect your fertility or be passed on to your children.

Doctors can also use a blood sample to check your karyotype to make sure you have all 23 sets of chromosomes. They can perform testing to look for other genetic causes of fertility concerns as well.

Is there a treatment for genetic conditions that affect fertility?

If you’ve been diagnosed with a genetic condition that affects fertility, you might be wondering what your treatment options are. The very unsatisfying answer is that it depends.

Where low levels of hormones are present, supplying the missing hormones or balancing the hormones may help some couples to get pregnant. An example of this is Kallmann syndrome in both females and males.

For some people, it may still be hard to get pregnant naturally. As such, other approaches may be recommended.

These can be intrauterine insemination (IUI) or assisted reproductive technology, which includes things like in vitro fertilization (IVF) and intracytoplasmic sperm injection (ICSI). A part of this process includes preimplantation genetic testing (PGT), which is a diagnostic tool to screen your embryos for chromosomal abnormalities.

What’s the outlook for people with genetic conditions that affect fertility?

While some genetic causes of infertility can be treated, it may be very difficult for many people with genetic disorders that affect fertility to become pregnant naturally.

As mentioned earlier, techniques like IUI and IVF may be effective for some people. But they may not work or be recommended for others.

Depending on the situation, it may be possible to use other approaches to start a family. Some examples include:

A genetic counselor is a healthcare professional who specializes in medical genetics. They can help you understand the results of genetic tests and can communicate the risk of a future child inheriting a specific genetic disorder.

Now let’s try to answer some of the other questions you may have about fertility challenges.

What increases the risk of infertility in females?

Some factors that boost infertility risk in females include:

. having overweight or obesity

. having intense physical or emotional stress

. contracting sexually transmitted infections like gonorrhea or chlamydia that can damage the female reproductive system

. having chemotherapy or radiation therapy

What increases the risk of infertility in males?

In males, things that can raise the risk of infertility include:

. having overweight or obesity

. having chemotherapy or radiation therapy

. being exposed to things like heavy metals, pesticides, and fungicides

Can infertility be cured?

The answer to this question depends on what’s causing a person’s fertility concerns. In many situations, fertility challenges can be addressed by using a variety of different methods, which can involve:

If you’re experiencing fertility concerns, your doctor can give you a better idea of your outlook for becoming pregnant.

Can you boost your fertility?

Generally speaking, making healthy lifestyle choices can help to boost fertility. These include:

. eating a balanced diet that:

. managing weight if you have overweight or obesity

. trying to exercise most days of the week while avoiding overexercising

. finding ways to reduce stress in your daily life

. reducing or eliminating alcohol consumption, if you drink alcohol

. cutting back on your caffeine intake, if you consume caffeine

. quitting smoking, if you smoke

. using a barrier method during sex to reduce the risk of STIs

Do females with infertility have periods?

Yes, although some causes of fertility challenges may impact a female’s period, many females with these concerns still have menstrual periods.

If you’re having trouble getting pregnant after 1 year of trying (or 6 months if you’re age 35 or over), make an appointment with your doctor. They can do a variety of tests to see what’s causing your infertility.

If you’re diagnosed with a genetic condition that affects fertility, your doctor will fill you in on potential treatment options. While this time may feel overwhelming or frustrating, know that there are many options open to you for starting a family.