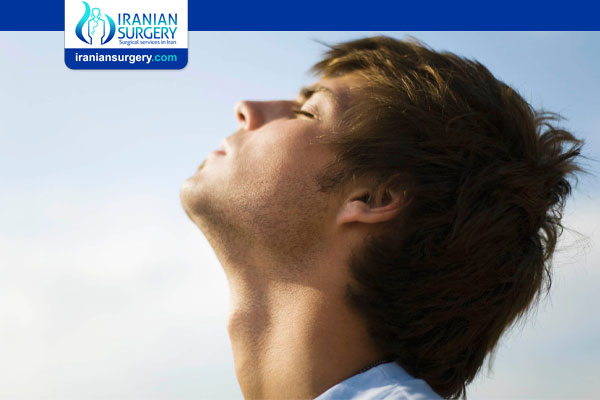 What is an Adam’s Apple?

During puberty, adolescents experience a number of physical changes. These changes include growth in the larynx (voice box). In males, the front of the thyroid cartilage that surrounds the larynx tends to protrude outward, creating a feature known as the “Adam’s apple.”

The name of this natural body characteristic goes back to the biblical story of Adam and Eve in the Garden of Eden. As the tale goes, Adam ate a piece of forbidden fruit from the apple tree, and a part of it got stuck in his throat. This is where the name “Adam’s apple” comes from.

Can women develop an Adam’s apple?

During puberty, boys develop a larger larynx. This makes their voices deeper over time, and it can create the bump at the front of the throat that’s known as an Adam’s apple.

Girls also undergo changes to their voice box during puberty. The degree of laryngeal growth in females isn’t as significant as in males, so most women don’t have Adam’s apples. Some women with a larger larynx do, but this indicates the size of the voice box only. In some women, a larger larynx may be caused by an increased amount of testosterone, which is also responsible for other body changes, such as body hair.

What’s the purpose of an Adam’s apple?

Having an Adam’s apple doesn’t mean you’ll be able to perform the above functions better than someone without one. It just means that your larynx is slightly larger in size.

When does the Adam’s apple develop?

An Adam’s apple develops during puberty. Before this stage, girls and boys have similar larynx sizes. Once puberty hits, the larynx grows in size and gains more cartilage to protect the vocal cords. In turn, your voice naturally gets deeper. The development of the larynx is larger in boys than in girls.

Just like other body changes, an Adam’s apple doesn’t suddenly appear overnight. If your voice is undergoing changes, such as occasional squeakiness, this could mean that your larynx is adjusting to the growth process.

Why do some people have a larger Adam’s apple than other people?

An Adam’s apple isn’t a medical concern, and it won’t cause any health problems.

Can you surgically alter the size of your Adam’s apple?

Having (or not having) an Adam’s apple depends on your own unique genetic makeup. Still, there are surgical options available to alter your Adam’s apple, whether you want to enhance it or reduce it altogether.

Adam’s apple enhancement is often seen in facial masculinization surgery, where a candidate desires more stereotypically masculine facial feature. It involves the placement of cartilage on top of the thyroid cartilage to create the Adam’s apple effect. This is an extensive type of plastic surgery that may not be covered by insurance. It’s primarily used in people with gender dysphoria.

It may take several weeks to recover following surgery. Talk to your doctor about all the benefits and risks of Adam’s apple enhancement.

There’s also a type of surgery available to remove an Adam’s apple, known as chondrolaryngoplasty. This procedure involves shaving off excess thyroid cartilage. Adam’s apple reduction is an extensive surgery that takes time to heal. Rare side effects include weakness in vocal ability and subsequent changes to your voice.

An Adam’s apple is simply a name for the area of the thyroid cartilage that appears more prominent on the front of the neck. It’s mostly seen in men following puberty due to more significant growth of the larynx, but it can occur in women, too. If an Adam’s apple (or lack thereof) is something you would like to address surgically, discuss your options with your doctor.